In my previous blog post I outlined some of my criticisms of the neoliberal stance against Big Government, and in particular the spurious arguments that are generally advanced in support of the concept of low taxes and the small state; arguments such as the Rahn curve. This is not to say that the Rahn curve is wrong per se. I doubt than many would argue that there should be no upper limit on government spending, or that politicians should always aim to make the public sector as large as possible. The real problems with the Rahn curve are twofold.

Firstly, it implies that the only variable that matters in determining economic growth is the quantity of government spending, and not what the money is spent on, or other factors within the economy such as levels of investment (public and private), education, consumer demand or inequality.

Secondly, it implies that there exists a single unique value for the ratio of government spending to GDP that is optimal for all countries irrespective of their size, their stage of economic development or their range of economic diversity.

For example, there are many developing countries with smaller governments and much larger growth rates than the UK: China, Brazil, India for example. But even if all developing countries with smaller governments than the UK have larger growth rates, that does not mean the UK would increase its own growth rate by following suit and reducing the size of the State. These countries have higher growth-rates than the UK because they are playing catch-up. They don't have to "re-invent the wheel" because other countries have already done that for them. Their growth is not constrained by the limited demand of their own consumers because they can piggyback on the higher spending capacity of consumers in more developed countries. And their governments are small because the disposable income of their citizens is small and so their tax base is small. Therefore the economies of these countries contain no lessons from which we in the UK can learn.

Instead much of the analysis tends to centre on comparisons between countries with advanced economies, particularly those in the OECD. Yet even here there is much subjectivity in the comparative analysis.

For example, last year Martin Wolf of the Financial Times analysed the growth rates of the 18 most advanced OECD countries over the 22 year period from 1989 to 2011 and published them on his blog. The 16 OECD countries he ignored were: Chile, Czech Republic, Estonia, Greece, Hungary, Iceland, Israel, South Korea, Luxembourg, Mexico, Norway, Poland, Portugal, Slovak Republic, Slovenia and Turkey. 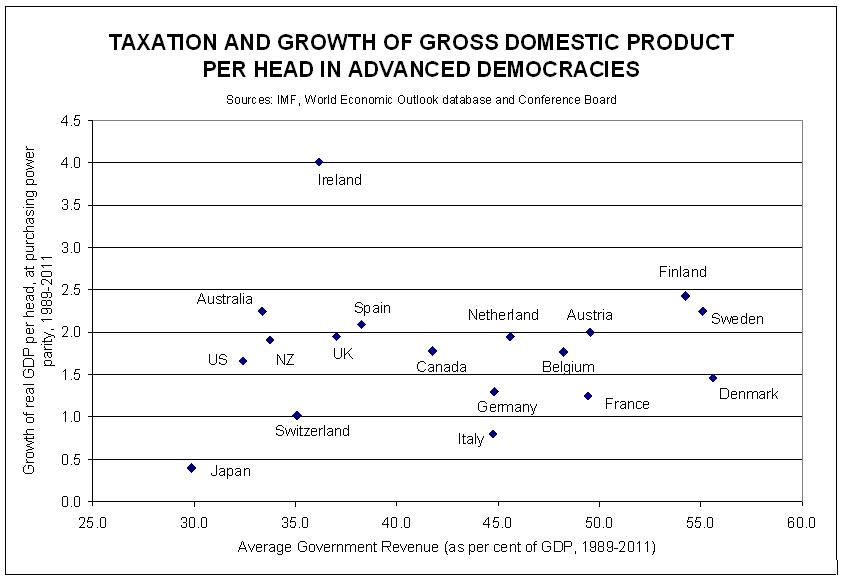 The results (shown above) indicate that there is very little evidence that low tax economies yield higher growth rates. Martin Wolf's interpretation of the data was:

The first conclusion is that there is no relation between the share of government revenue and the rate of growth of real output per head (that is, productivity) over the 1989-2011 period. The “regression line” is flat.

I disagree. If you discard the data points for Ireland and Spain for the reason that their growth over the period was artificially inflated by transfers from wealthier EU nations (Martin Wolf also discounts the Irish datum as being an "outlier"); and also those of Australia and Canada because they atypically have economies based on mining and agriculture rather than industry, banking and services (so their growth is not endogenous but is inflated by rises in commodity prices driven primarily by growth in China); then the data actually points to a positive correlation between Big Government and higher growth. The regression line through the remaining data points is linear and has a distinct upward slope. In fact the rise in growth rate is about one percentage point for every 28% of GDP spent by government. Not bad! Not bad at all in fact!

Of course there are many other studies by right-wing economists and think tanks that claim to prove the opposite by selectively using different baskets of countries (often ones with wildly dissimilar economies and questionable political systems) or dubious statistical averages. The approach taken here by Ryan Bourne and Thomas Oechsle at the right-wing Tory/Thatcherite think tank, the Centre for Policy Studies (CPS) is a case in point and one that I find particularly dubious for reasons that I might discuss in a future blog post.

One way to avoid the complication of comparing different countries is to stick to the same country but then compare its performance under different macroeconomic conditions. The history of economic growth in both the UK and the USA over the last 150 years is a good example. Over this period both countries experienced periods of small government (before 1929) and large government (after 1950). The neoliberals would have you believe that the earlier period, when government was small, was a period of dynamic and rapid growth, with the animal spirits of the entrepreneur freed from the later suffocating bureaucracy of the State. What rubbish! 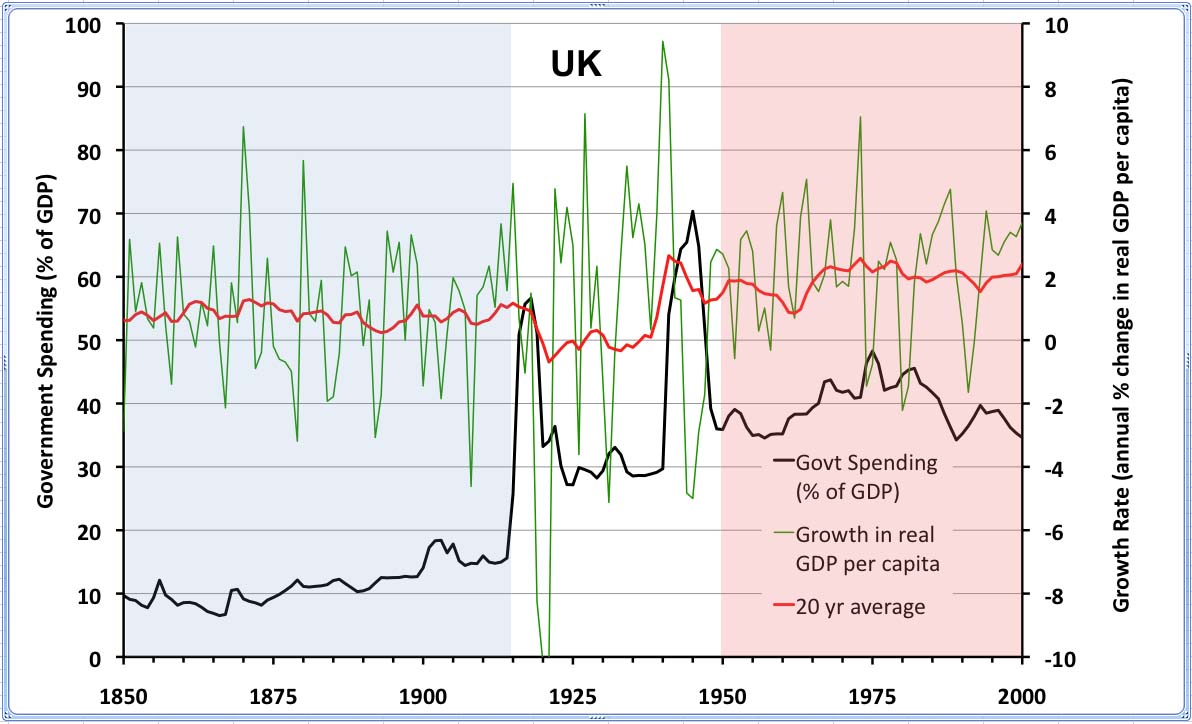 The graph above illustrates the growth in real GDP per capita in the UK from 1850 to the year 2000 (green curve) together with the size of government (black curve). I have highlighted two distinct regions. The blue region is the period of small government where government spending was generally less than 15% of GDP (with a slightly higher blip during the 2nd Boer War). The pink region is the period of Big Government where government spending was generally above 35% of GDP. The period from 1915 to 1950 has been discarded from the analysis because the economy over this time period was dominated by war spending for the First and Second World Wars. Yet the contrast in GDP growth between the blue and pink periods is stark.

Firstly, GDP growth was more unstable in the blue period than it was in the more recent pink period. There were more recessions and those recessions were deeper. The twenty year rolling average of GDP growth (as indicated by the red curve) also shows two distinct patterns of behaviour. This data is shown again on the graph below for greater clarity. 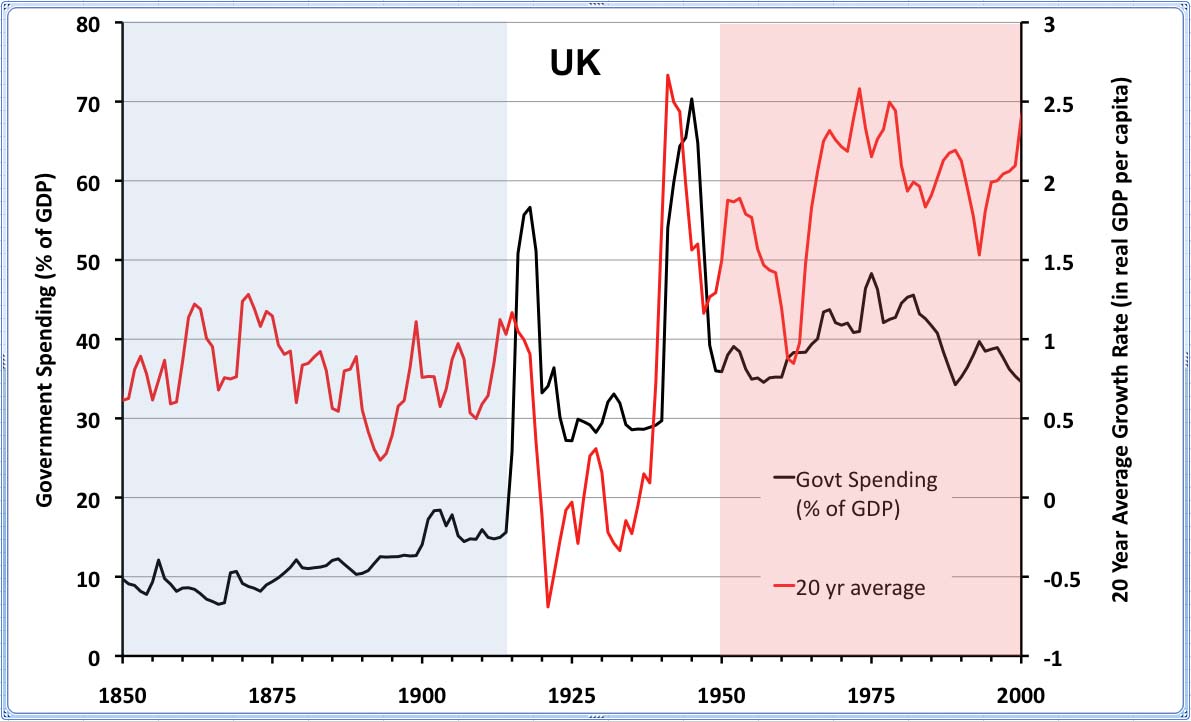 And yet they are not just confined to UK economic performance. Exactly the same trends are to be seen in the economic data of the USA over the same periods. 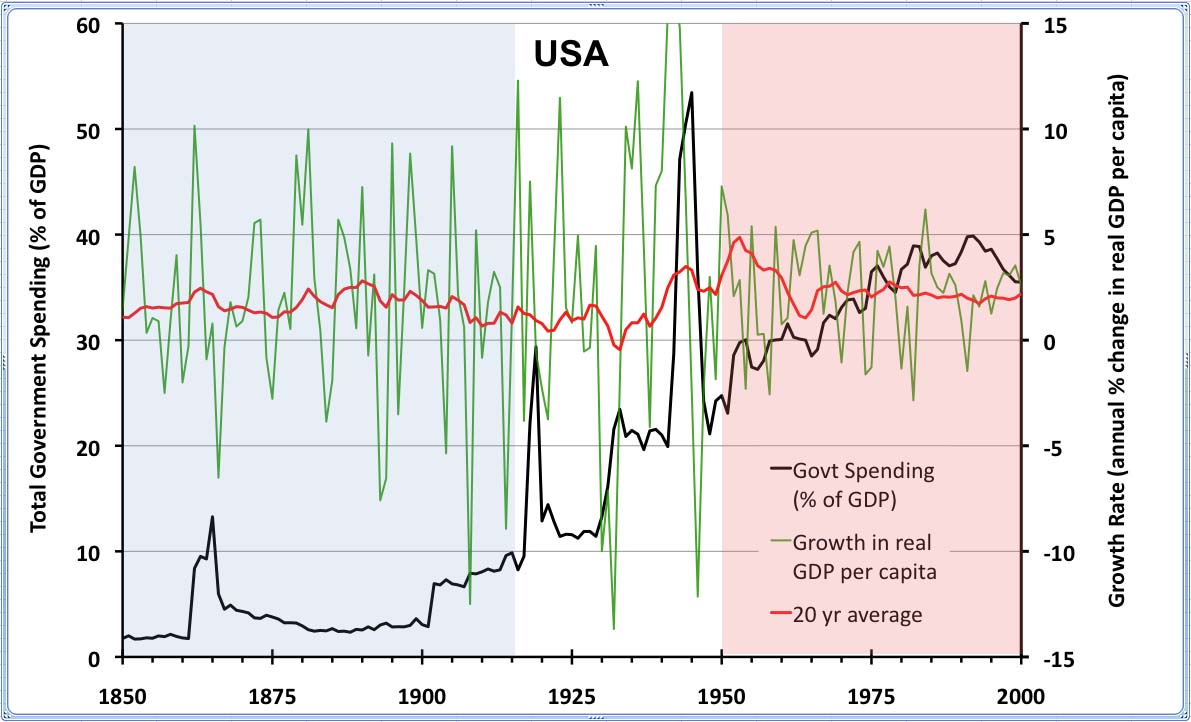 For the period 1879-1929 real GDP was 5.5 times larger in 1929 than it was fifty years earlier. That equates to an average annualized growth of 3.47%. Yet for the fifty years after 1950 the factor was 5.6 and so the growth was actually slightly higher at 3.50%pa. However this neglects the effects of population growth.

Between 1880 and 1930 the US population grew by 150% whereas from 1950 to 2000 it only grew by 86%. So the annualized growth rates in real GDP per capita for the two periods are actually 1.6% and 2.2% respectively. Once again that is a big difference, particularly when continued over fifty years, although the difference is not as stark as in the UK. This difference over time can be seen in the plot of the 20-year rolling average of GDP growth in the graph below. 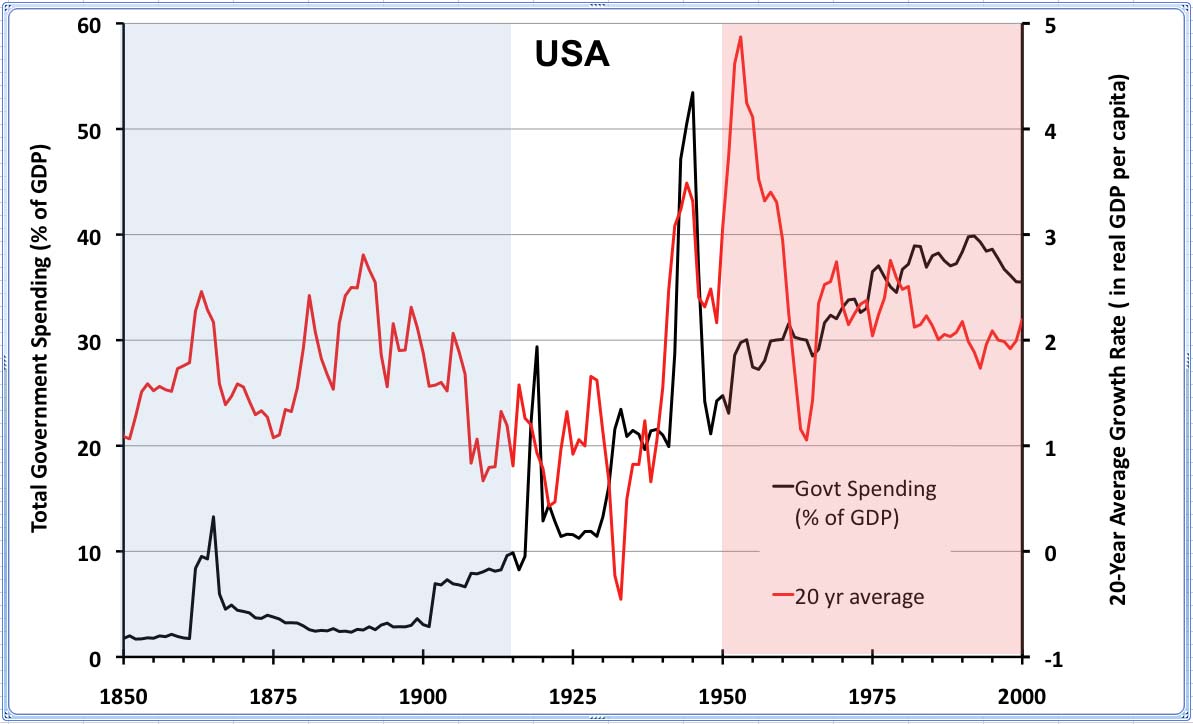 However the benefits of higher public spending don’t end there. They are also seen in the volatility of the growth rate and the frequency and severity of the ensuing recessions, just as in the UK case. The striking thing about the GDP growth rate over the period 1879-1929 is its extreme volatility. One year growth could be over 10% and a couple of years later GDP is contracting by just as much. This happened repeatedly over that period. As a result the average growth rate was 3.6% but the standard deviation in this value was even greater at 5.2%.

Contrast that with the second half of the twentieth century where the average growth rate was 3.5% but the standard deviation was actually much smaller at 2.3%. Not only that but this period also experienced recessions that were mild by historical standards with contractions in GDP of typically only 1%-2% each time. The period 1879-1929 on the other hand was blighted by repeated recessions where GDP contracted by 5%-10% or more.

What this demonstrates is the stabilizing effect of high government spending (plus of course the added benefits of a Federal Reserve Bank and deposit insurance instead of a system of free banking which existed for most of the 19th Century). It is easy to see why. If government spending is high and generally fixed, then the capacity for the economy to contract during a recession is reduced. So recessions are less severe, less capital investment is lost due to business failures and so when the recovery begins less new capital investment is needed to replace what was lost in the recession. Thus the economy functions more efficiently with higher overall growth rates.

Moreover, even in boom periods Big Government aids growth because it provides the private sector with guaranteed markets. That improves business confidence and therefore raises long-term investment. Not only that, but Big Government also increases the level of redistribution within the economy, thereby reducing inequality and raising aggregate demand, which also boosts investment confidence and growth.

So for those still hankering after small government I suppose the BIG question is this. Which type of economy do you really want to live in?

Wow! What a tough choice.

Welcome to: the change we need

My personal manifesto for social democratic and economic reform.

My Favourite Blogs and Political Sites

Cantab83
I am a scientist and Labour Party member with an interest in economics.